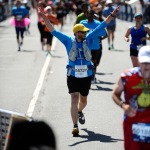 Well, after baby-girl-arrival somehow I completely withdrew from music making and moved to things that push my physical boundaries. They make me to understand my body’s limits. They make me feel alive. Weird.

In May I attempted to climb Mt. Shasta and bailed out at ~12,000 ft. I could do a little more but I decided to help zoned out teammate to descend to the base camp at 10,000 ft. Yet it was a fantastic experience. Got my own crampons and ice axe to scale this and more mountains in the future.

Then there’s that run-a-marathon thing. I ran 1st half of SF Marathon last year. Made it before allotted time limit to my surprise in 2:46. It was turn to do 2nd half this year again then. Wow, I pushed my personal score to 2:33! It is like shaving one mile off at my “jogging” pace 😉

I nearly cried to see my two gals (plus my Mom so that’s three) at the finish line. They called my name, I turned my head and… 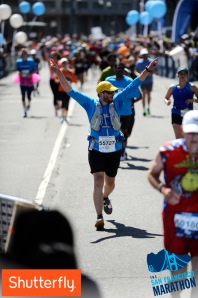 The next challenge is… paragliding training.

Well, I got one of these overpriced GoPro gadgets. My excuse was our daughter’s birth (brought it with me to the delivery room, ha!) but deep in my subconscious-male-mind were: motorcycling, kites, SUP, scuba and what else wild+exciting there is on this planet! Last weekend I took the GoPro first time underwater during my Monterey scuba trip (well, the GoPro was baptized with water well before during first baby bath).

I also hacked the helmet mount into a wrist mount. Don’t forget to tether your camera!

As a typical first-time-experience-experiment I decided to let the GoPro record things in its waterproof casing in “auto” mode and then take a deep dive, both literally and as a metaphor. How surprised I was later reviewing the footage at home. Seeing the color shifts (awful green) as different wavelengths of visible light spectrum get absorbed the deeper you go (staring with red). I did not realize how underwater photography and videography challenging is – Wikipedia, Underwater Photography.

GoPro in “auto” mode constantly gets confused each time lighting or underwater visibility changes. This is quite common when diving in California. Color correcting and grading in post production was an absolute nightmare due to dynamic changes done by GoPro’s firmware. Additionally, at 45 feet red registered by GoPro’s sensor was just at noise level. Barely anything-red was left.

In this first dive and video I did not do any color correction. I overcame GoPro’s “auto” balance mode by cutting the footage.

END_OF_DOCUMENT_TOKEN_TO_BE_REPLACED

And the man learned from the bird…

I have always dreamed about flying. Noting unusual as for a human, I guess. Was Icarus really the very first of us trying to conquer the skies?

I have always been mentally locked-in that flying in 21st century law-regulated-world requires private pilot license at minimum. I took initial flight lesson, scoped time, money and effort it takes to get necessary ratings. Even thought of alternative sport pilot license as a shortcut to my dream. Never accomplished anything essential on my way to becoming a pilot and I have been only gaining experience on flight simulators available for personal computing devices. Occasionally taking my power kites and skateboard out.

I just had to meet that one Flamenco-dancing PhD woman who shared her hang gliding dream with me and rewarded me with the most incredible birthday gift to date. Tandem flight with an instructor she found in Hollister, CA. This experience totally opened my mind and brought me closer to my dream of flying. It seems reachable by my arms and affordable. The sport is not much regulated in the US other than by one association (scuba diving has two). It is also by far safer than riding my Ducati on I-880 around Oakland. I am going to signup for my Hang 1 classes soon!

I wish Flamenco Woman could fly with me that day. She was 4+ months pregnant with our daughter on that day. Both of them will fly soon 🙂

Photos of Famous People With Cameras

outdegree
Create a free website or blog at WordPress.com.